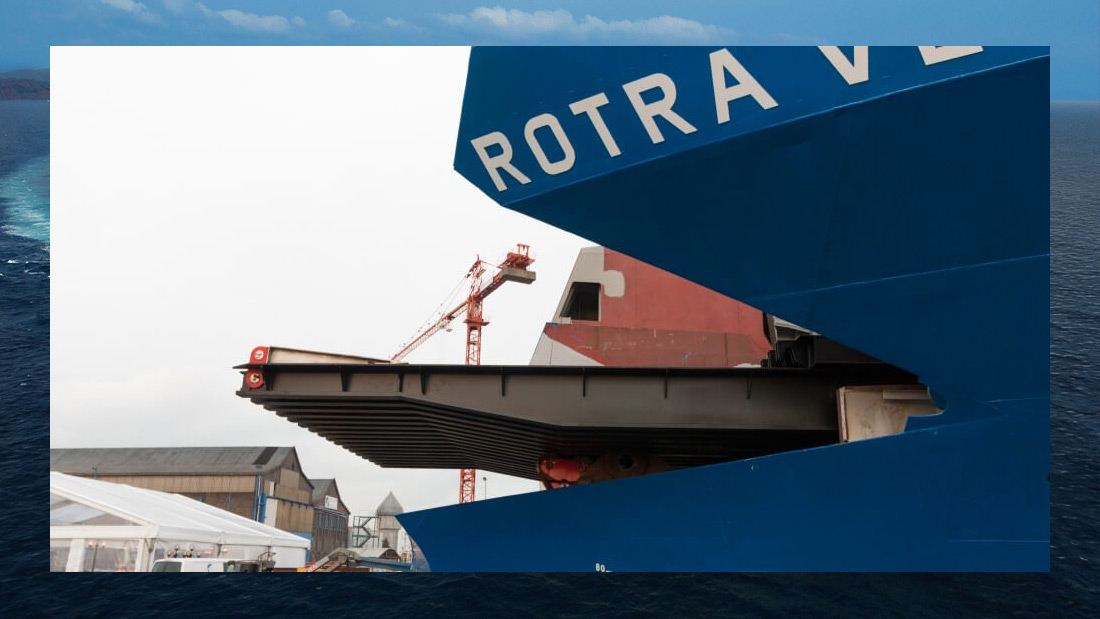 The Concordia Group has recently delivered and commissioned a particularly innovative vessel. This particular heavy cargo “roll on/roll off” coaster is specifically designed for the efficient transportation of wind turbines parts.

The Rotra Vente is 141 meters long and 20 meters wide. Remarkable are the specially developed bow and the extendable ramp. Both the bow as the ramp are controlled by hydraulic systems. The vessel’s “roll on/roll off feature makes it possible to driven cargo to and from the cargo deck. For Siemens, the charterer of the vessel, provides this way of loading and unloading leads to a more cost effective operation.

Siemens will use the Rotra Vente mainly in the North Sea area for the transportation of mast, nacelles (engine rooms) and rotor blades for wind turbines. The specially designed detachable roof protects the precious cargo on the vessel from sea water and weather conditions.

The Concordia Group has designed and realized the ship in 10 months’ time. The base was an existing hull of a container ship, which skillfully is transformed into a ‘special service heavy cargo vessel with ramp’. By choosing a rigorous conversion of an existing vessel Concordia is applying a diversification strategy to get overcapacity out of the containermarket.

The Rotra Vente is innovative in nature. In addition to the characteristic movable bow and ramp the vessel is equipped with the latest technology. So it has an extreme heavy cargo deck, there is a fully autonomous ballast-and deballastinstallation and the propulsion of the ship specially designed matching the hull form and performance criteria , achieving a maximum fuel efficiency.

The vessel is converted in Werkendam and Hardinxveld-Giessendam. The main contractor Holland Shipyards has been assisted by many companies from Werkendam and the surrounding area.

Meanwhile, the second vessel, the Rotra Mare, is expected to be completed in the first quarter of 2017.